1 IN 4 CHILDREN IN THE U.S. ARE SEXUALLY MOLESTED.
88% OF CHILD SEXUAL ABUSE IS NEVER REPORTED.

We’ve helped victims like Aaron Fisher. We’ve stopped perpetrators like Jerry Sandusky. We are ready to help you.

I am a victim or a family member of a victim.

I am a therapist qualified to support victims.

I want to learn how I can help.

I am an educator or a community organizer.

I care and want to support Silent No More.

I want to make a donation.

I KNOW SOMEONE WHO MAY BE A PERPETRATOR.

The system assumes people know how to respond to abuse. Many do not. The system relies on victims coming forward. Most do not.

Too often, perpetrators with power or fame get away with intimidating their victims. Too often, they aren’t prosecuted despite sufficient reason.

What began as a fight for justice is now a mission.

Michael created Silent No More to do more to end child sexual abuse in our world – because more must be done. 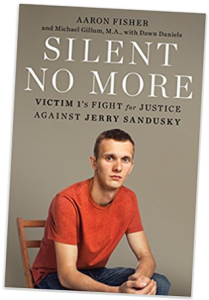